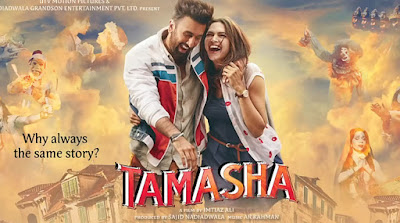 Before I watched the movie, I was all set to open this review with a snarky comment about the trailer’s “why always the same story?” tagline. Because YJHD made buckets of money and boy does the press get a lot of mileage out of promos with Deepika and Ranbir, that’s why. But it’s actually kind of a weird movie. Our protagonist, Ved, is a boy obsessed with story. He seeks it out, learns of its universality, and tries to make his life one as well. He (Ranbir Kapoor) meets Tara (Deepika Padukone) on vacation in Corsica, and Ved thinks it would be a great story to go a bit nutty together and make up lies about themselves so they live it up for a week, promising never to see each other again.

I credit Veer-Zaara with basically my entire Bollywood obsession. Ten years ago, my best friend and I ordered the dvd on the basis of a) Shahrukh Khan and b) the “Love Legend” tagline. We’d already watched Bride and Prejudice, which isn’t a very good movie, Devdas, which I hated, and Dil Se, which I really, really, did not get. Veer-Zaara was a good choice. Like Kandukondain, this movie is just as good ten years later. Maybe even better.

So we start with an absolutely standard romantic ballad in the yellow mustard, starring Shahrukh and an unknown woman. It’s not bad, but it’s not poignant until you’ve actually, you know, seen the whole movie.

After the credits, we meet Saamiya (Rani Mukerji), idealistic human rights lawyer in Pakistan. She’s been assigned her first case, an Indian prisoner who’s been in for 22 years. It’s probably an unwinnable case, since the man won’t speak. Until Saamiya addresses him as Veer Pratap Singh, previously of the Indian Air Force. And he tells his story.

Veer (Shahrukh, duh) was a rescue pilot with the Indian Air Force and it all started when he met a girl. A girl from Pakistan, spoiled and sheltered, and very beautiful, with a kind heart. Her father is a rich man, and has fixed her marriage with a political ally. Zaara is charming, because, well, she is played by Preity Zinta and there’s no way she couldn’t be. But her Bebe (Zohra Sehgal, the best grandmother Bollywood has ever known) passes away, and her dying wish is that her ashes be taken to Kiratpur, in India, to join her Sikh ancestors. So Zaara goes, alone, to India.

I love Fred. We meet her in these episodes, so they can do no wrong in my eyes.

Cordelia has a vision of a girl in a library (FRED!) being sucked through a portal, and at the same time a demon has come through another portal in Lorne’s bar. It’s from Lorne’s home dimension Pylea, and he is very interested in completely avoiding any discussion of it, but they accidently open yet another portal and call one of Lorne’s relatives. After an adventure with him, they send him home. But Cordelia is inexplicably taken too. Very inexplicably, since she’s standing right next to Wesley and he doesn’t even notice.

Angel is pissed. And frantic. They are going to Pylea to rescue Cordelia, and that is that. And he is not interested in excuses like Lorne’s complete unwillingness to return home, or in Wesley’s concerns about travel mechanics.

Meanwhile, Cordelia discovers that in this world, humans are slaves, and seeing visions means you get tortured with pokers to determine if you’re “cursed”. Fred (FRED!) tries to help Cordelia adjust to Pylean life. She’s been there forever, and you don’t go back. 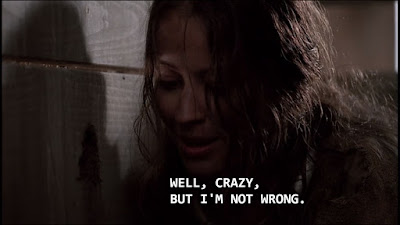 It’s time for the 75-year review at Wolfram & Hart! Fun times for all when a Senior Partner comes to visit. I love the concept of Wolfram & Hart. Something about the mundane merged with supernatural evil makes me laugh every time. So employees are subcontracting goat sacrifices, and very possibly trading in the souls of their firstborn children. 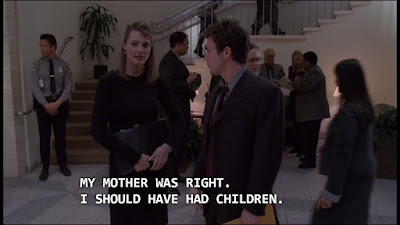 Skipped some episodes because lazy.

So, Wolfram & Hart brought Darla back from the dead, as a human, in order to mess with Angel’s head. This has been very effective. Now we are up to speed.

Cordelia and Wesley are really tired of Angel brooding about Darla. As am I! So when Gunn shows up needing help to foil a mystical heist, we are all very happy for the distraction. Even better is Angel disguising himself as a flashy vampire, and best is Angel and Gunn bro-ing at each other for the top demon-fighter spot.

And we’re back to Darla. Her human body is picking up right where it left off, dying of syphilis. Angel offers his life to save hers, but that doesn't pan out. He’s got a lot of angst riding on saving Darla, which makes it much worse when Wolfram & Hart invite Drusilla to LA to do what Angel won’t.

This is a terrible episode. It really is. If you want a sexy vampire trying to give Buffy a taste of the darkness behind her slayer power, that is what Spike is for. If your guest actor isn’t as hot as James Marsters, the entire premise fails. The end. 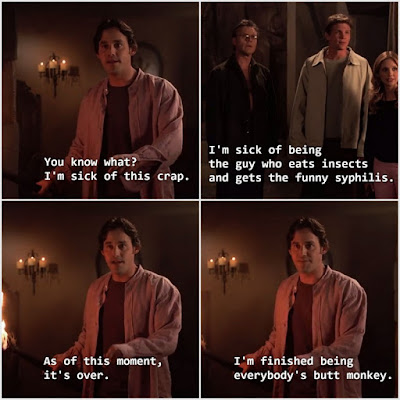 A world without shrimp

Something nice and light after all the Faith stuff. We begin in a Sunnydale championed by hero Jonathan, writer, movie star, popular with the ladies, and way better at slaying vampires than Buffy. Jonathan paraphernalia is everywhere, as even Tara and Willow tape pictures of him to their wall.

His spell unravels, though, and the world returns to the way it was. Jonathan is again alone and inconsequential. In this season, he’s not even the butt of jokes. I think this is the only episode he appears in.

“Where the Wild Things Are”

Buffy and Riley have so much sex that they awaken disturbing spirits of the frat house during a party. Sunnydale frat houses are bad, bad news. I don’t think anything good ever happens in one during the entire run of Buffy. Anyway, this is a very dumb premise, but the episode’s not too bad.