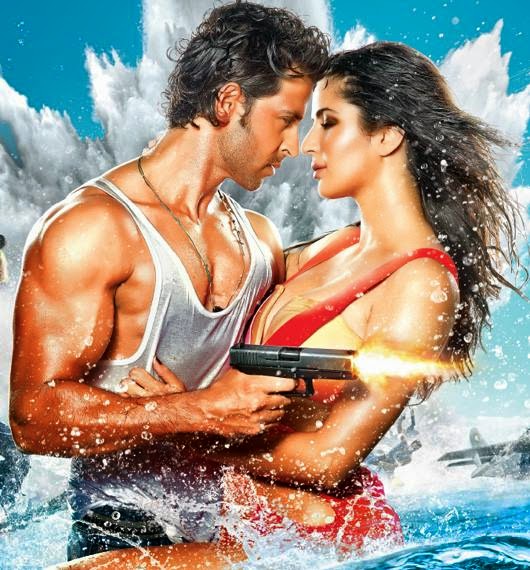 Well, that was fun. This is a shiny, over-the-top remake of some random Hollywood movie that I haven’t seen anyway, so I can’t really bring myself to care that’s it’s not original. Originality is not what I’m looking for, which is good because Bang Bang! stars Hrithik Roshan as a dangerous yet sexy criminal, Katrina Kaif as carefree young woman caught up in international adventures, and Hrithik’s hair gel as an indestructible force of nature.


Harleen is a bank receptionist living in Shimla with her spunky Dadi, dreaming of far-off places and wearing very appealing knitwear. Rajveer has stolen the Kohinoor diamond for an angry crime lord who wants to disrupt India/British relations, but demands more money and is pursued across the rooftops of Shimla by henchmen. He easily escapes, because he can jump from the highest buildings and come out with nothing more than stylishly ripped jeans. Harleen meets him when he’s mistaken as her blind date, but when she’s seen with him, she also becomes a target for the crime lord and is whisked away for more fights, more intrigue, and attractive international location songs.


Harleen is a very enjoyable protagonist, and Katrina is as cute as can be:


I assume this is what they were going for at the end of Ishq Shava, with the carefree attitude and miniskirts, but this actually works and I love it. With this and Dhoom 3, I'm now firmly on team Katrina. Plus, the songs are Harleen’s fantasies, not Rajveer’s, and while he’s unquestionably the hero, the story follows her instead.


The plot doesn’t actually make sense, but there is a scene with Hrithik fighting in the ocean with little jetpacks attached to his feet. Also one where he shoots a plane with a harpoon gun, then uses it to water ski and catch up with the plane. And there are these great shots from Harleen’s perspective with Hrithik all oiled up and posing like he’s on a romance novel cover. The point is, I thoroughly enjoyed every minute of this movie, and I left hoping that Harleen takes her Dadi on their next around the world adventure. She’d like it.
Posted by mb at 6:03 PM No comments: