I decided to give this movie another chance. I watched it a year ago and disliked it, but it’s stuck with me and when I gave it another shot, I liked it better. Reduced expectations FTW!

The premise is made to be printed on the back of a dvd cover. Two strangers meet at night on a bridge in New York, preparing to jump. Akash (Ranbir Kapoor) has bankrupted his company in the recession and Kiara (Priyanka Chopra) found out that her fiance cheated on her. Their suicide attempts are aborted by the coast guard, and they sneak out of the hospital together to try again. This could be really good material for a black comedy, as they try another few botched attempts to kill themselves together. I think Ranbir and Priyanka could pull it off, but the writers went the easy route and made a movie about people deciding to live each day as if it's their last and learning valuable lessons about love and life along the way. That doesn't have to make it a bad movie, but there's glimmers of what it could have been along the way. Aas Paas Hai Khuda ends with a really poignant scene where Akash realizes that he’s no longer eager to end his life, and his connection with Kiara is why. And he finds out, suddenly and horribly, that she doesn’t feel the same way. The moment is sent straight to the trash once she’s in the hospital, as her doctor rants at Akash about how unappreciative some people are and how kids these days don’t value their life like they should.

This was one of the first Indian movies I ever watched and seven years later, I think I enjoy it as much as I did then. Tabu and Aishwarya Rai are fantastic and so are the songs. The whole thing is just delightful.


This is a Tamil riff on Sense and Sensibility with some nice updates like both sisters holding jobs and being successful. Really, Marianne’s character is made to be an Indian movie heroine, with her hyperactive romantic ideas and tendency to wander around in the rain thinking of her true love, and Aishwarya as Meenakshi is as beautiful, impulsive and poetry-loving as you might wish for. Sowmya (Tabu) is great as the more restrained and responsible older sister, and the friendship between them, despite their differences, is very sweet.


Sowmya meets aspiring director Manohar (Ajith Kumar) and they’re both very awkward and cute, but he bravely confesses his love ASAP although he has to prove himself by directing his first movie before he can marry. Meenakshi meets Major Bala (Mammootty) when he causes a drunken scene at her dance performance. For him, it’s love at first sight and he promptly gifts her classical music lessons and quits drinking. For her, he’s a mild annoyance after she meets Srikanth (Abbas) who comes striding out of a storm reciting poetry to rescue her from a twisted ankle. He, of course is a self-centered owner of a scammy investment bank and you know the rest of the story from there.


The family is kicked out of their palatial home for inheritance reasons and have to struggle in Madras. Major Bala helps Meenakshi get work singing and Sowmya works her way up from receptionist to software programmer and even secures a visa to the US when she thinks Manohar no longer loves her. It won’t be a spoiler to say it all turns out well. It’s all very cute. 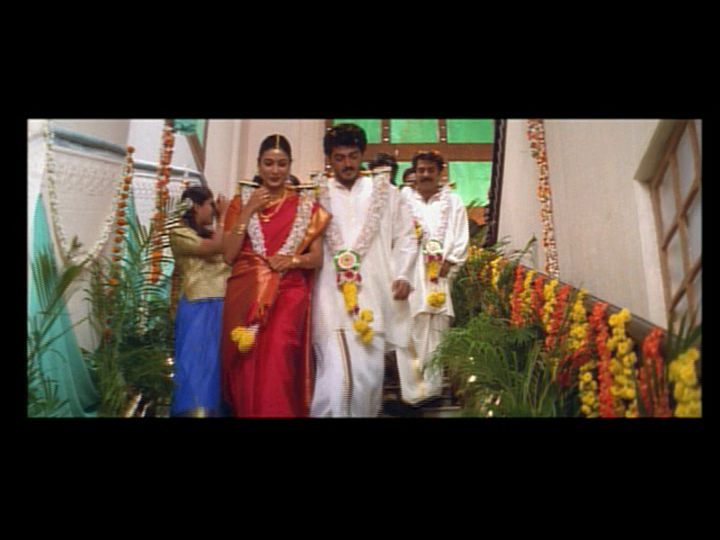 And no review of this movie would be complete without the title song, where Aishwarya dances around a drafty Scottish castle in a skimpy bobbled sari as her lover arrives in a long flowing cape. (The subtitles are not the best, but in searching for a better video I instead found this adorable Kandukondain/Free Fallin' mashup that I feel the need to share.) 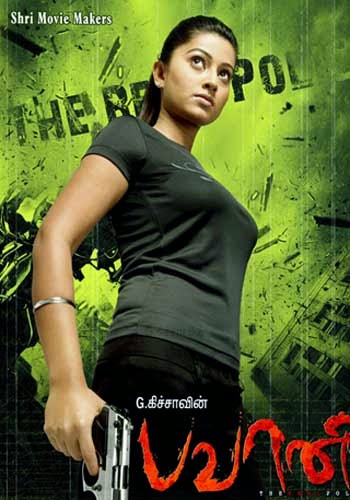 Sneha as a bad-ass lady cop? Yes please. ACP Bhavani takes her khaki-fitting tips from Chulbul Pandey and takes shit from nobody. Not from the corrupt politicians who run the town, not from their neverending parade of rowdies, and not from the corrupt and apathetic police at her station. She’s brave, honest, likes object lessons and is really, really good at her job. She beats up a lot of people, all of whom deserve it.

It’s pretty strictly an action movie. There’s no romance track, and the family drama is limited to the villain and his son using Bhavani’s sister as a pawn in their escalating war. Her father is around too, but what do you say about a character who is willing to marry his daughter off to her rapist? Nothing good, that’s for sure. There’s what appears to be an attempt at a comedy track involving a slapstick policeman with a Hitler mustache, but I don’t think he’s ever involved at all in the actual plot. Which is sparse, unfortunately. Mostly it’s just the villains doing worse and worse things (and we started off with girls off the street being kidnapped, raped, and murdered, so, yeah) in retaliation to Bhavani’s crackdown, and her beating people up, striding around taking down lawbreakers, and removing her sunglasses dramatically.

So it’s not that good of a movie, but I cannot stress this enough: Sneha as a bad-ass lady cop being bad-ass for 2 hours is completely worth your while, assuming you don’t mind the violence. (And at least it’s played as serious instead of comedy like in R… Rajkumar.) It’s also one of the few Tamil movies on Eros Now with subtitles.

Just a simple drama about two childhood friends, Siri and Chandu, and their relationships as they grow up. Shruti Haasan and Siddharth are delightful. It’s so nice to see Shruti being fun and happy after watching her in 3, and Siddharth is a pretty adorable dancer. The story, though, didn’t quite do it for me. It’s very Jaane Tu Ya Jaane Naa: a boy and a girl are good friends, everybody thinks they’re secretly in love, despite being engaged to other people. The twist is that they’re right. They don’t have romantic feelings for each other, and don’t want to marry. The trick is to convince everybody else.


The problem I had was their naivete about their relationship. Okay, you’re best friends. But have some boundaries! If you run roughshod over other people’s couples time, or you call your best friend excitedly while on a date with your fiance, they’re going to get pissed. It could be worth examining how any closeness between men and women has to get scrutinized as potential romance, but Siri and Chandu seem completely oblivious, as if “we’re just friends” is supposed to excuse damaging their romantic relationships. The climax was pretty frustrating as well, with Siri’s fiance and Chandu having it out, while the women hang back and accept their verdict. I watched this for Sameera Reddy, having loved her in Vettai. She didn’t actually have a whole lot to do, but I didn’t end up minding because it was a touching story of the relationship between Surya (Suriya) and his father (also Suriya). It’s a little slow, but it’s stuck with me for the intimate portrayal of their family. It’s so nice to see a realistic happy family on screen and you feel comfortable with the characters immediately.

I don’t know that the movie's strictly realistic, since between the young love and family interactions there is unnecessary dishooming, dramatic army missions, and expressing your grief via pelvic thrusting all over town, but the emotions and relationships rang true, and happen very organically. The only bad note was Surya’s second love interest Priya (Ramya) who could have easily been replaced by a placard saying “Hi, I am the girl-next-door cliche”. On the other hand, they made sure not to devalue Surya’s relationship with Meghna (Sameera). Major props to Simran, who was seriously flawless as Surya’s mother.
Posted by mb at 8:30 PM No comments:

As the opening credits went by, crediting Ajay Devgan with the story, direction, production and lead role, it was hard not the be apprehensive, especially considering he’d roped his wife in as co-star. I love Kajol, but that doesn’t mean the movie is going to be good. And the first hour is pretty intolerable. Ajay (Ajay Devgan) meets Piya (Kajol) while on a cruise with his friends and goes to the typical ridiculous lengths to woo her. Ajay’s really too old for this exuberantly infatuated act, and the songs are bad. Finally that’s over and they get married, make a list of dreams for the future on their bedroom wall, and then things start to go wrong. Piya forgets things, sometimes little things, but when she gets lost on the street in front of her apartment building they have to admit something is going on and she’s diagnosed with early-onset Alzheimers at 28, and that her pregnancy is exacerbating her symptoms. 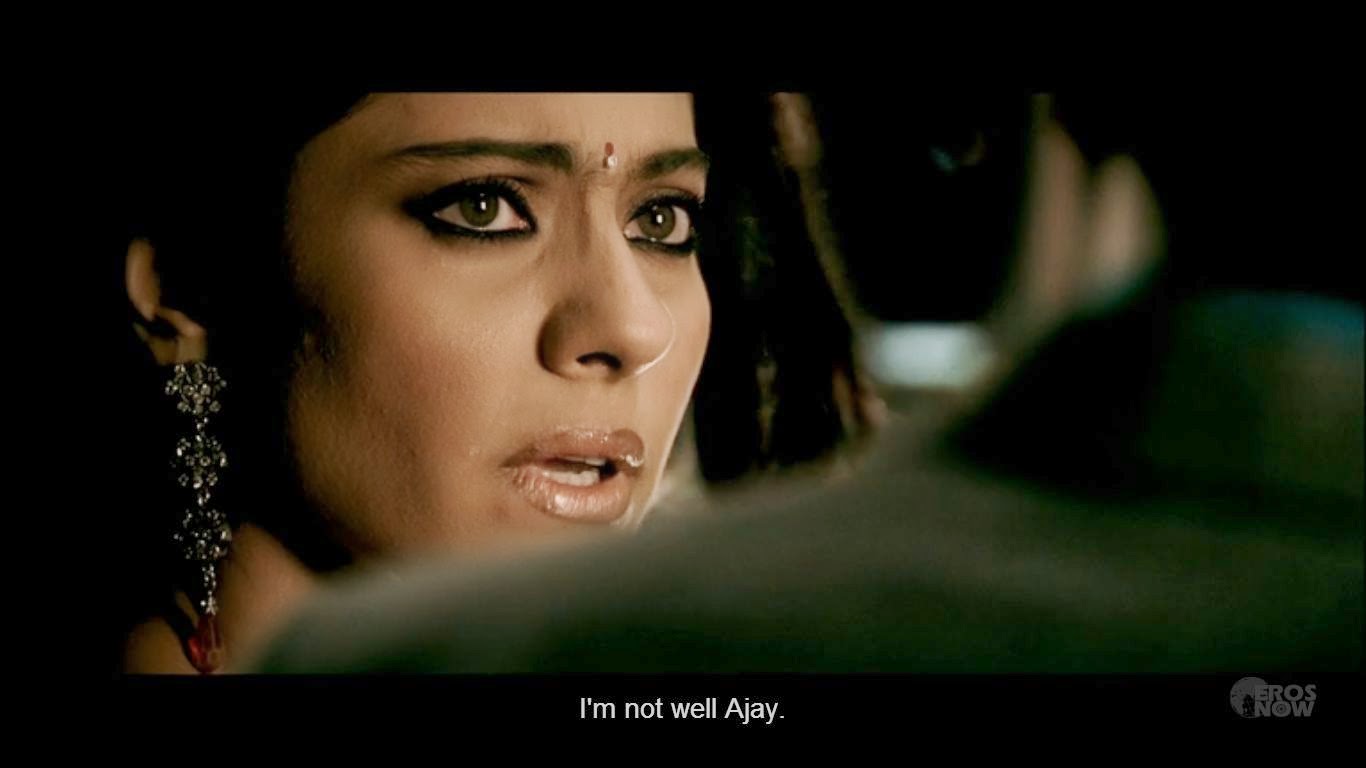 This is pretty solid emotional melodrama, as long as you can accept Movie!Alzheimer’s for what it is: fits of confusion and forgetting with none of the messiness of the actual disease. Kajol pulls it off well, Ajay less so. In some of the shots it’s really obvious that he’s the director and thinks getting the view of his angst from every angle is very important. Ajay’s friends from the cruise are still around to help him through Piya’s decline-- they’re mostly forgettable, but Divya Dutta brings that extra solidity to her role which I always appreciate.


Finally, after an incident where she forgets her son in the bathtub, Ajay decides to admit Piya to a care facility, but she doesn’t stay. Ajay misses her too much, and Piya is scared and angry without him. And since this is Movie!Alzheimer’s, it’s totally okay to bring her back home and they live happily ever after-ish.

The central conceit of the movie is that this whole story is told in flashback, as older Ajay narrates the story to older Piya, while they are taking the 25th wedding anniversary cruise that they both dreamed of long ago, whether she remembers it or not. I guess living at home worked out because she doesn’t seem to have lost much function in the two decades since her diagnosis. If only true love could really manage degenerative brain disease like that.


My real problem with this movie isn’t with Movie!Alzheimer’s or that it’s a bad movie, it’s that instead of telling a story about an illness, it twists the illness to tell the story. And I’m all for filmi escapism, but diseases aren’t meaningful narratives. They're just shit that goes wrong. It's great if you can find meaning in that, but it gets on my nerves when you force it.
Posted by mb at 12:23 PM No comments: