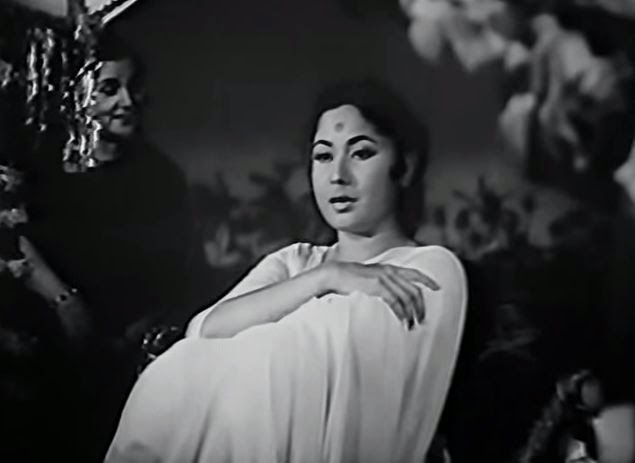 “I have given my heart to one who loves another.” There’s a reason that my Bollywhat profile says “Putting on too much eyeliner and pretending to be Meena Kumari”. She’s captivating, and I watched this movie solely on the basis of the haunting Ajeeb Dastaan Hai Yeh. I felt in the mood for a very lighthearted review, but this movie is beautiful and despite my distaste for Raj Kumar as a romantic lead, I was completely entranced.

This is (apparently, I didn’t notice it until I read wikipedia) a remake of On the Waterfront that translates really well to a Mumbai neighborhood run by a vicious and short-tempered gangster, Ronnie. Siddhu (Aamir Khan) is a petty criminal and boxer whose brother Jai works for Ronnie. Siddhu’s not interested in following Jai’s path, but he sees no reason to oppose Ronnie’s reign of fear, either. He’ll take the odd job match-fixing by beating up a cricket player, but he’s busy with his own stuff, like romancing a stunning, motorcycle-riding, and tragically dubbed Rani Mukerji (Alisha).

We are to understand that Siddhu is very brave, or at least brash, after a game playing chicken with an oncoming train. (That goes for Aamir Khan, too, who did the stunt himself. And by “stunt” I mean actually jumping out of the way of a moving train like you see in the movie.)