Do Nazis ever make stories better? They do not make this story better. In “Hero” we get more of Doyle’s backstory, and find out that like Angel, he’s also seeking redemption. And what he’s seeking redemption for is ignoring a fellow demon who needed shelter from demon Nazis. The demon Nazis are, unsurprisingly, seeking to rid the earth of demons that have mixed with humans - such as vampires and people like Doyle - and are so very Nazi that one might wonder why they don’t mind their ideology being stolen entirely from those humans they despise. Seriously. We get the race parallels, Joss. No need to jackboot it into our heads.

But Doyle gets to save the day. He even does the dramatic thing and punches out Angel to get there first, kisses Cordelia, and leaps to his death to save a whole group of oppressed demons. And he gets a proper goodbye, with Cordelia's badly scripted commercial. 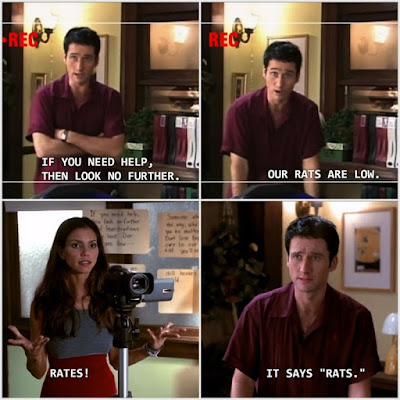 I don't know why his death in particular always hits me this hard. He was only there for 9 episodes, but it kills me every time I watch it.

She left him for a fungus demon

Didn’t it seem like your freshman roommate was actually a soul-sucking demon from an alternate dimension? Wouldn’t you have liked them to get pulled through a transdimensional portal back to the demon world from which they came? Buffy gets all the luck.

“The Harsh Light of Day”

It continues to suck to be Buffy, as she attempts again to date someone normal. Turns out that after sex not only can vampires turn into soulless demons that try to kill all your friends, humans can also show their true colors as douchebags. For a show that gets such feminist kudos, it sure would be nice if Buffy stopped getting punished for sex. Anyway, at the same time, Spike is back in Sunnydale again, and it’s totally not because he’s obsessed with Buffy, definitely not, there’s just some ring that makes a vampire invulnerable conveniently buried there that he’s looking for. He’s also finding some of his own consequences to sex, in that the newly vampired Harmony has started calling him “Blondie Bear”. 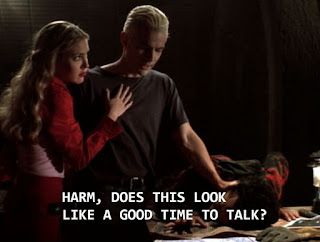